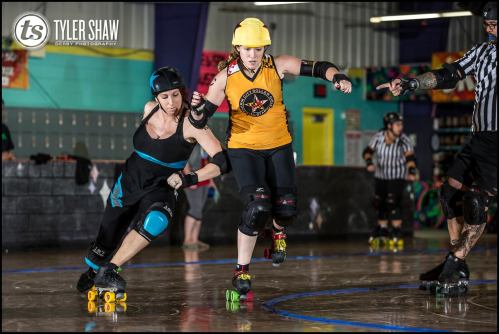 This year has been nothing but top-notch derby in the state of Florida. We’ve got skaters on Team USA, multiple teams going to playoffs and we’ve been bringing in more out-of-area teams than you can shake a skate at. Tournaments seem to be the big draw this year, and the ladies of Gold Coast Derby Grrls took things in one giant step forward by hosting Beach Brawl 2014 back in May. This was a great event that not only boasted some amazing line ups, but also gave several international teams a chance to get some serious bout experience against a slew of teams stateside. Overall, 6 countries and 24 teams were represented and we got a preview of Team USA.

Tampa Roller Derby did it again this year with Franky Panky, named in honor of mascot Frank the Flamingo. This derby tradition on our west coast has been going strong since 2010 and has brought Florida spectators bouts such as Jacksonville v Atlanta (2012) and my personal favorite Tampa v Philly (2013). 2014 was not a year to sk

ip out with Tampa, Jacksonville and Charm City among others slated to play. Charm City has been a team I had admired from afar via WFTDA.tv and I couldn’t wait to see Nuckin’ Futz’s fancy footwork in person.

Another person I really wanted to see was CCRG All Stars Captain I.M. Pain. She really lives up to her name and bursts through packs with power, fueled on speed. She’s a very physical skater as most of her pictures show; she’s either in the air, throwing hits or flying around opposing skaters. Here she shares with us a little bit of her speed skating background, what its like to move from a local-level team to a WFTDA league and a tasty recipe.

When did you start derby?
I went to my first practice in the Spring of 2009 with New River Valley, but then I had to take a short break to concentrate on the end of the semester (I was in grad school at Virginia Tech at the time) and a summer study abroad to Istanbul. So I didn’t really get going until the end of the Summer in 2009. I tried out for Charm City at the end of May 2010, after I graduated and moved to the Baltimore/DC area.

Like many skaters currently playing for Division 1 teams, Charm City is not your first league. What were some of the big changes that you encountered when you switched to CCRG from New River Valley?
NRV was a really small league when I started skating with them. They’re still on the small side, but back then we were lucky to fill a 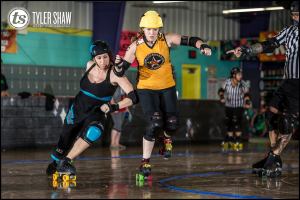 roster. That was a great way for me to start though. I had the skating background, but knew nothing about derby, other than that a few of my friends from speed were doing it. I hadn’t been on quads in a long time. I actually skated my first few practices on rentals. Moving to Charm, there was a huge difference. More practices, about 4 times the skaters, more than two officials, more responsibilities, and a much higher level of play. Skating in a smaller league (before they were even WFTDA apprentice!), I was able to get away with a bit more. I don’t mean that in a legality sense. I mean that I don’t think I really knew how to play derby before I came to Charm. I could rely much more on my skating ability. So, moving to Charm, it was an awakening. I’m pretty sure I just about died the first time Dolly Rocket hit me! I still obviously rely on my skating ability, but at some point, I actually had to learn how to play derby!

You’ve been a speed skater for longer than some derby skaters have been alive. What drew you to the sports of speed skating and then roller derby?
I can hardly remember a time before I skated. I started competed in speed skating in 1988, when it was on quads. My dad’s parents met at a roller rink, so that’s why I think he started taking me so young. He grew up skating too. If you would have asked me 6 years ago, I never would have guessed that I’d be playing roller derby now. I was at speed nationals in 2008, chatting with Racer McChaseher from Detroit. She was telling us all about this new movie that she got to be an extra in (Whip It!). It was pretty exciting. After Nationals that year is when I found out I’d been accepted into grad school. I tried to keep speed skating, but the closest team was just outside of Roanoke, which was about an hour away from Virginia Tech. I couldn’t balance that drive, with the hours required for speed training with Grad School. My degree obviously had to take priority. I decided to just check and see if there were any local roller derby leagues, since Racer made it seem like a lot of fun. Turns out NRV was only 5 miles away. I didn’t actually contact them immediately, though. I ran into them out at a bar in Blacksburg, and they convinced me that night to join the team. So, I always joke that the way I got into roller derby is that I got picked up at a karaoke bar!

What are some of your favorite moments of your derby career so far?
I would say my favorite moment was making it to Champs (in 2010) my first season with Charm. That was also the first time Charm had made it to Champs. And then, skating at Champs that year in Chicago. My mom lives there, so she was able to come and watch us win our game the first day, against Minnesota. I was also very proud of the fight we put up against Rocky Mountain in the second day. That was the year they went on to win, so I was very proud of our team for doing so well against the would-be 2010 WFTDA Champs!

One of my newest favorite moments was skating at RollerCon in the East vs West All Star game. That was a lot of fun! It was such an honor to get to skate with and against some of the best in the world, and it didn’t hurt that the East won!

Do you even bother with additional cross-training anymore?
YES!! Always cross train! You can’t ever take it easy. The minute you rest, or think you’re good enough, that’s when someone passes you by! You have to keep raising the bar for yourself. Especially since derby is still evolving, there is always room to grow.

What are some key foods that you rely on to keep your energy up for practices and competition?
I eat a lot of hummus with vegetables, bananas, almonds, peanut butter, grapes. Really, anything that is easy to pack and stays good for long periods of time without refrigeration Bout days are always long, so I try to keep things that like on hand. At Champs in Chicago though, we always got back to the hotel so late that the only thing usually open was the Dunkin Donuts across the street. I ate a lot of bacon egg and cheese bagels that weekend! Since I had a pretty good showing, my husband and I joke now about that being my super food!

Is there a favorite recipe that you’d like to share with readers?
Yes! This is one my husband and I found a few years ago that is pretty healthy, easy to make and super cheap!

2 (14.5 ounce) cans Italian-style diced tomatoes
1 (19 ounce) can cannellini beans, drained and rinsed
10 ounces fresh spinach, washed and chopped
8 ounces penne pasta (we switch up the shapes – lately we’ve been using Cellentani for this recipe)
1/2 cup crumbled feta cheese (though we often use Parmesan because we have it on hand)

We add garlic, basil, oregano, black pepper, and whatever other spice we’re feeling at the moment. I would also add mushrooms in, if my husband didn’t hate them!

Sometimes we add tomato paste to the recipe as well – if so, we also pour in some red wine.

1. Cook the pasta in a large pot of boiling salted water until al dente.

2. Meanwhile, combine tomatoes and beans in a large non-stick skillet. Bring to a boil over medium high heat. Reduce heat, and simmer 10 minutes.

3. Add spinach to the sauce; cook for 2 minutes or until spinach wilts, stirring constantly.

4. Serve sauce over pasta, and sprinkle with feta.